The 9/11 decennial brought no end of opinions. Here, The Citizen has compiled a taste of what you may or may not have read to mark the occasion.

This national mood was (and remains) completely oblivious to the legitimate grievances that pervaded the Arab world. These grievances were associated with Western appropriations of the region’s resources, Western support lent to cruel and oppressive tyrants throughout the Middle East, lethal and indiscriminate sanctions imposed for an entire decade on the people of Iraq after the first Gulf War, deployment of massive numbers of American troops close to Muslim sacred sites in Saudi Arabia, and America’s role in Israel’s oppressive dispossession of Palestinians and subsequent occupation.

On the morning of 11 September 2001, standing in the atrium of the Littauer Building at the Harvard Kennedy School, I looked up at the television screen and saw smoke pouring out of the Twin Towers. Around me were students from all over the globe, including many Americans. Some had friends who had boarded flights leaving Boston at eight that morning—friends they would never see again.

A decade after the 9/11 attacks, Blame America-ism still permeates classrooms and the culture. A special 9/11 curriculum distributed in New Jersey schools advises teachers to “avoid graphic details or dramatizing the destruction” wrought by the 9/11 hijackers, and instead focus elementary school students’ attention on broadly defined “intolerance” and “hurtful words.” No surprise: Jihadist utterances such as “Kill the Jews,” “Allahu Akbar,” and “Behead all those who insult Islam” are not among the “hurtful words” studied.

“The two wars have exhausted the United States and indirectly resulted in the downgrade of the country’s credit rating. The United States opened a Pandora’s Box under the banner of combating global terrorism, only to find that domestic terror threats have grown rapidly.”

“What does it mean to you to be an American? After Sept. 11, I proposed an idea I call the “Pledge Plus Three.” Why not start each school day with the Pledge of Allegiance, followed by a teacher or student sharing for three minutes “what it means to be an American”? Ask students to stand, raise their hand, and recite the Oath of Allegiance, as immigrants do when they become U.S. citizens.”

And now we’re being deluged with TV specials, all of which have accepted the lie that 9/11 did actually change the world – it was the Bush/Blair repetition of this dangerous notion that allowed their thugs to indulge in murderous invasions and torture – without for a moment asking why the press and television went along with the idea. So far, not one of these programmes has mentioned the word “Israel” – and Brian Lapping’s Thursday night ITV offering mentioned “Iraq” once, without explaining the degree to which 11 September 2001 provided the excuse for this 2003 war crime. How many died on 9/11? Almost 3,000. How many died in the Iraq war? Who cares?

We’d like to suggest a third option. As young participants of a multicultural global community, our challenge is to ground ourselves unapologetically in our own individual identities, religions and cultures, celebrate what makes us special and unique, and, at the same time, harness our individualism to further mutual respect and understanding. Rather than fear our differences, we can embrace them, move beyond absolutist dogma to acknowledge and appreciate the beauty and uniqueness of every person and belief.  The real “clash of civilizations” isn’t between east and west, but between moderates who promote peace and extremists who oppose it. 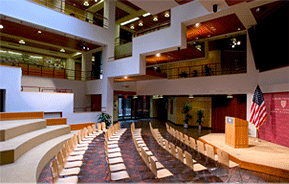 OPINION: A case for more space

December 9, 2012 Comments Off on OPINION: A case for more space

OPINION: Still something to be thankful for

November 19, 2012 Comments Off on OPINION: Still something to be thankful for