Debate around the HKS bidding system continues to escalate as students question the efficacy of the school’s method for allocating seats in popular classes during the registration period.

The question came to a head during the early weeks of September when students were allocated various “points” and instructed to bid on the oversubscribed classes according to their preferences.  The JFK Forum became a hub of constant exchange in which students shopping for classes shared opinions, bidding cost predictions and relevant information throughout the registration period.

Many students, feeling the intense pressure of the situation, began to organize and explore alternative options.  As Gilles Fuchs, MC/MPA ’13 points out, “HKS registration is currently set up in a way that invites gaming the system.”

Fuchs is not alone in his sentiment.  Under the current system, students are required to preselect up to five courses.  They may choose from offerings at HKS, other Harvard graduate schools as well as surrounding schools like Tufts and MIT. The available course options number in the thousands.

So although the Kennedy School limits pre-registration to five classes, students initially cross-register with other schools and significantly add to that number.  Because the various school systems do not share information, students are able to register for an excessive number of courses, fully intending to drop the extra courses once bidding is finished and options are known.  While this ensures that the individual student receives at least some of his preferred classes, it causes a false over-subscription number and creates an unnecessary bidding war for the group.

Another unintended consequence of the system is the focus shift that causes many students to lose sight of their original plan.   Often students come to Harvard with a clear idea of the course of study required to realize their career objectives, but after experiencing the collective stampede that exists around a few celebrated classes, they lose focus of their objectives and find themselves confused by mob mentality.

Many students feel that the chaos around bidding renders the first three weeks of the semester virtually useless in terms of productive learning time.  The level of effort required to solidify schedules and the amount of time lost waiting for bidding results, cross-registration approvals and addition of signatures significantly decreases the focus on the classes themselves.

Often, students do not purchase books or course packs until three weeks into the course when they are sure that the course will remain on their schedule, thus falling behind in their studies.

This year, Fuchs proposed an alternative plan.  He approached the HKS student body and proposed a trust-based system in which each student would complete an online form prior to the start of the bidding period indicating their final choices of courses they planned to keep or drop. He reasoned that if students collectively embraced the plan, a careful analysis of the raw data could clarify which classes were actually going to bidding and thus allow students to make educated guesses around the points required for each class prior to the bidding start date.

About a third of the HKS students embraced the plan and, after the results were analyzed, it became clear that several oversubscribed courses were no longer full. Fuchs was able to contact the students who wanted those classes and let them know prior to bidding.   His understanding of game theory, algorithms and his willingness to stay up late scrubbing data was critical to the success of the endeavor.  In order to maintain integrity, Fuchs himself registered for classes before the analysis began.

Other students have discussed and proposed alternative plans. At the end of the first round of registration, an ad hoc group of 18 frustrated MC/MPAs gathered to brainstorm solutions to the most pressing concerns stemming from the fall shopping and bidding processes and timing.

“Most students came to HKS from far away, and most of us are paying the significant costs out of our own pockets,” said Kevin Prager, MC/MPA, who moved from Brussels in July. “Many if not all of us have put our careers on hold, stopped our community work, given up our salaries and left our families behind to learn crucial skills for a year.  We did not make all of those sacrifices to – as some have recommended – choose one course and put all of our points in to get into it.”

The MC/MPAs drafted a list of 23 problems for which they have proposed simple solutions that, they say, will reduce stress for students from all programs, ensure attendance of even the most obscure seminars and help rein in rampant bidding inflation.  Among the proposals are an increase in the amount of time between shopping, registration and bidding, web streams of courses on shopping days and the assignment of advisors far earlier in the summer.

“Students understand that the Kennedy School has limited resources,” Prager said. “But they also know that some improvements can be made simply.  So we’re stepping up to the plate to help improve our school over the long term and, with any luck, our own experience here.”

The group intends to offer its recommendations to the KSSG and the HKS administration in the hope that several tweaks can be made for registration for J-term and spring semester. 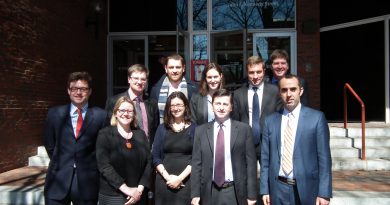 November 30, 2011 Comments Off on TPP = The “Problematic” Partnership or The “Progressive” Partnership?

November 24, 2012 Comments Off on HKS voting project launch a success