Once you’ve been here for a while, you’ll eventually see them: the black SUVs parked in the Kennedy School Quad, with their flashing red and blue lights, and the taciturn men in dark suits with earpieces and Oakleys. And we’ve all noticed the Very Important People who occasion this swirl of pomp and circumstance, as they alight from their vehicles, or as attentive aides whisk them about. Visiting dignitaries are a fact of life at this institution, but it takes a particularly questing academic mind to wonder what that swirl means in a scientific sense.

Jennifer Lerner, Professor of Public Policy and Management, is just that sort of seeker. Her office looks out over the quad, and as The Citizen interviewed her, a black SUV and security personnel were coincidentally waiting for some unidentified luminary. “Yes, there they are,” she said, and it was the ubiquity of the experience that prompted her, in part, to examine what it means to be the person at the center of the swirl. Using her position as Founder and Director of Leadership Decision Making, a Harvard executive education course, she was able to access and interview leaders across a range of sectors and a range of ranks. The results are two recently published studies with fascinating but counterintuitive results. Professor Lerner and her coauthors have upended the portrait of the burdened boss, the stress-fractured figure who ages faster than the rest of us owing to the weight of his responsibilities.

“Upon the King!” Shakespeare’s Henry V exclaims, “let us our lives, our souls, our debts, our careful wives, our children, and our sins lay on the king!” Four hundred years later, we still embrace the picture of the leader who bears his subordinates’ loads, as well as his own. But it turns out that leaders—especially powerful ones—actually experience less stress than non-leaders. This was demonstrated in Lerner’s first study via self-reported responses and through measurements of cortisol levels (Cortisol is an adrenal hormone that the body releases in response to stress). The second study showed that decreasing stress levels are observable even among leaders perched on different rungs of their respective ladders: the higher up one goes, the lower the stress. “Not only are leaders less stressed than non-leaders,” the co-author of the study, Gary Sherman, also of Harvard, told the New Zealand online newspaper Stuff, “but more powerful, higher-ranking leaders are less stressed than less powerful, lower-ranking leaders.”

The reason? “Control” says Lerner. Such control, she notes, does not require mastery of the environment, but rather “the perception of having influence” over the course of events and subordinates. More highly-ranked leaders have greater control and thus less stress. So perhaps it is Mel Brooks, rather than Shakespeare, to whom we should turn: “It’s good to be the king.”

It is not only leaders who can profit from these observations, however. Allowing subordinates to experience the perception of influence—what Lerner calls “the sense of predictability that goes hand in hand with perceived control”—may also be able to reduce their stress levels.
“Having control can mean things like flex time,” she notes, “so I get to decide which days I work at home, which nights I work late.” These “little increments of control” may be enough to give subordinates some of the same benefits as their bosses.

Before leaping to the assumption that the head that wears a crown lies easy, however (to paraphrase a different Shakespearean Henry), Lerner presents an important caveat. Leaders who operate in “contested hierarchies” don’t experience decreased stress levels like their more stable counterparts.

So is this why presidents age so noticeably in office? Is this why Obama’s hair has gone white?

“That is certainly one possibility,” Lerner says. “He is in a contested hierarchy, and his leadership is attacked on a daily basis and so our data really can’t speak to his situation. But cortisol and other stress hormones are most likely harming his health.” Maybe the saying should be Uneasy lies the head that wears a crown—if that crown can be taken.

All this is presumably good news for Kennedy School students who aspire to climb the ranks. Just think—all the effort and the long hours will eventually be rewarded by a stress-free sinecure where your car comes with a driver! And if, on the climb, you’re lucky enough to have a boss who takes lessons from Lerner, and allows you the perception of influence, you’ll probably have less stress as you ascend too. It really is good to be the king. 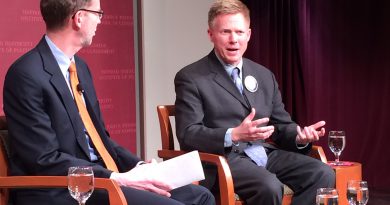