The developing world is evolving, there’s no question there. But, is the global perception of the emerging worlds evolving at the same rate? Arguably not, and Africa is no exception.

This year’s Africa Business Conference, held this upcoming weekend at Harvard Business School, seeks to help further the notion that Africa is evolving and the global perception of it should too.

Breaking away from years past, conference organizers insisted on showcasing the thriving, vibrant and trending industries that are poised to take off in coming years;TV and Media being one of them. For the first time, the conference is hosting a film-screening Friday night of Half a Yellow Sun, to highlight this fact.The Producer will be present for a Q&A following the screening.

Below, La Keisha Landrum interviews conference co-organizer Fope Adelowa, a second year at Harvard Business School, to hear more about why she and her team are pushing for a global embrace the “New African Story,” the subtitle of this year’s theme,“Redefining Africa.”

LL: How is this conference different from those held in the past?

FA:   This year, we want to showcase more industries where the continent is thriving and which have received less focus in the past, particularly from the international community. We are expecting business leaders in technology, media, entertainment and luxury goods.
LL:  What are you most excited about at this conference?
FA: Three things: I’m excited about the film screening of “Half of a Yellow Sun,” which features Thandie Newton.

LL: Thandie Newton?!
FA: Yes, and this is the first time we are doing this!  I’m nervous and I hope it is a good reflection of the book and of Nigeria.
FA: I’m also excited about the panels – the Entrepreneurship panel, the Luxury Goods panel and the TV and Film panels. It’ll be exciting to hear from the entrepreneurs who have tried different projects in these emerging industries in Africa. And, the keynote speakers!

LL: Who is the most interesting Keynote?
FA: They’re all really great. The finance minister of Nigeria is especially interesting. She recently implemented the removal of fuel subsidies in Nigeria and that caused a lot of outrage. To the masses, they felt it was unjust. I respect her a lot, especially given her years at the World Bank. It’d be amazing to hear some of the policies she is looking to implement in the future.

LL:   And, I hear there are parties?
FA:  Yes! First, there’s the banquet, which is already sold out. We will have two of our platinum sponsors, Standard Chartered Bank and Bridge International Academies present to the audience during the banquet. We will also present the ABC Leadership Excellence Award for this year to Fola Laoye, Chairman of Hygeia Nigeria Limited, promoters of Hygeia, the largest health maintenance organization in Nigeria.  After the banquet will be the closing party, where we have one of Nigeria’s foremost hip hop artists perform.

LL:  Wow, that’s great. OK last question. What will make this event a success to you?
FA: A few years from now, when I’m hearing stories of entrepreneurs and business leaders say what changed their mind about Africa … was a conversation, a discussion or a panel they sat in on at the Harvard Africa Business Conference.
This article is reprinted from the Harvard Business School newspaper, The Harbus. 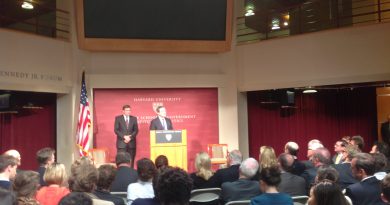