Home > Opinion > Opinion-archive > Confronting ‘isms’ in Kennedy School and beyond

They say that the more you find out, the less you know. In my final few weeks at HKS, I have confronted my own naïveté.

HKS is a meeting point for hundreds of students from all walks of life and from every corner of the world, working to address their common interest in the public good. Indeed, we are trained as policy architects, with tools and frameworks to lead, reduce conflict and maximize public value for all.

Or maybe, value just for some.

The recent bout of heavy media attention regarding Kennedy School academic work may be perfectly timed for the introspective amongst us. Jason Richwine’s PhD was minted on the premise that IQ should yield a racially-segmented hierarchy somewhere under the “white native” population in America. Substantive outrage aside, Richwine’s 2009 dissertation is simply hurtful. First, no one should have to confront the idea that their race determines their cognitive abilities, because it’s simply not true. Second, this idea was peddled at the doctoral level of our very own program.

For me, the worst feature of this affair is that Richwine’s thesis was not really “discovered”. It merely surfaced after Richwine’s more recent work on the cost of immigration reform prompted some investigative Googling. This thesis sat on the HKS Library’s shelves seeding other racist policies for years. It was literally under our noses, or under our feet, as we listened to Forum speakers address the very racism the thesis espoused.

Furthermore, I realize that it may be possible that I could have casually hung out with a future Richwine at a Quorum Call. If we just found out about one racist thesis published four years ago, surely there is at least one other person who endorses an equally reprehensible worldview somewhere in our class of 2013. It may be overt racism, homophobia, sexism, apartheid, Islamophobia, or classism. All of which is forgiven over some Goldfish, pretzels and a few drinks.

I am not naïve enough to think that there aren’t people out there who want to dehumanize others. We’re well aware of widespread dehumanization based on immigration status, gender, color and religion. But the sad reality is that there are both students and faculty here – within HKS – who provide the thought leadership on it.

During my time at HKS, I’ve already foregone answers to tough questions on dehumanization. Why are minority racial groups excluded from the national security apparatus? Why do male-majority chambers get to decide women’s rights?

I’ve also observed both the beauty and fallacy of our human moments. We shared a human moment on Marathon Monday, and truly felt it while we sheltered in place. We assembled, wept and donated for the victims in Boston – my home of 25 years – in a moment of strength. I contrast this with the way we sat feeble in front of the NRA President in the Forum, as he skillfully rationalized the cause of terrorism in an elementary school and a movie theater over the past year. When terror struck during a Mother’s Day parade in New Orleans, or when it strikes daily in Anacostia or South Side, we barely bat an eye.

But in our institution, WMD terrorism gets the attention of at least one seminar every week. It’s worth asking ourselves whether human moments are just for some.

If I look back at my two years and ask what it was all for, maybe it was to reset expectations, and realize that frameworks perpetuate ignorance too. For most of us “getting on the balcony” is the means for diagnosing the context for leadership. But for some rock star MPP or MPA, the balcony is the perch of privilege from which they dehumanize the weak, cast the poor as lazy, and mark the dark-skinned as “low-IQ”.

But looking at my time another way, maybe it was to be inspired. In this context, a few of our classmates rejected the game as given. Their 3D negotiation deal-design diagram led them to seed national press coverage of a racist dissertation, collect the signatures of thousands, and then lay them on the table with the University leadership with a clear message: “never again”.

The most inspirational lesson I received was in “Religion, Politics, and Public Policy”, where my classmates of all religious backgrounds, believers or not, seemed to agree to not merely coexist, but to develop a thick tolerance of one another.

If both Richwine and his class of 2013 protégé are policy architects, then so am I. Even as a brown-skinned guy with a name too hard to pronounce correctly the first ten times you try and an introverted space junk enthusiast, I still have the imperative to lead for the public good.

And most importantly, even if you exclude me by race, I reflect on the fact that I will still independently think for myself. I still get to believe in what I believe: idealist, realist, naïve or not.

February 7, 2017 Comments Off on HKS Should Employ Grade Non-Disclosure 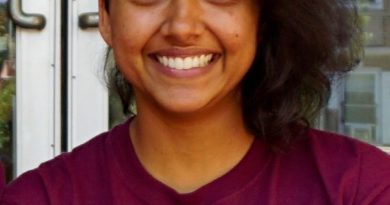 November 16, 2016 Comments Off on HKS, Meet Your President: Q&A with Arohi Sharma

November 19, 2012 Comments Off on OPINION: The optimistic re-election of Barack H. Obama