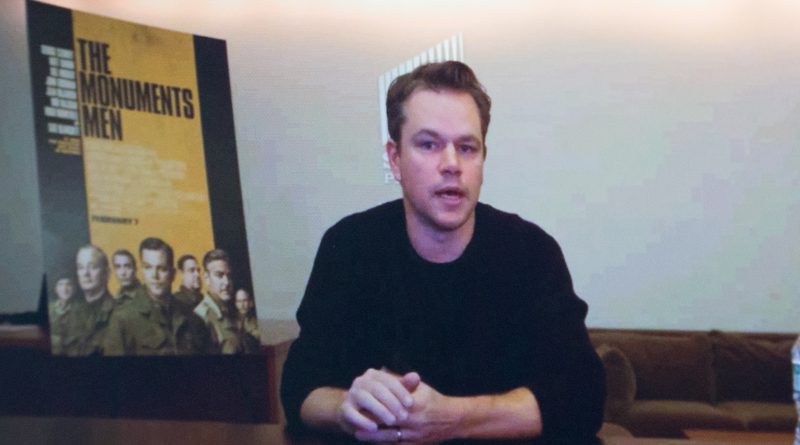 The Ghent Altarpiece, Nazi thieves and Matt Damon took the screen at a recent Institute of Politics (IOP) forum event. Monuments Men, a glossy, big-budget Hollywood production features the fate of the western worlds’ great art works including a fiercely sought after Michelangelo masterwork plundered by the Nazis during World War II.

Damon, a notable Harvard drop-out, skyped from New York and joked that it was his first time at the Kennedy School. Damon plays a part based on James Rorimer (Harvard Class of 1927) an art historian and curator enlisted by George Clooney’s character to assist the Allied forces protect cultural artefacts. Clooney’s character was inspired by Lt. George Stout former head of the conservation department at the Fogg Art Museum.  The movie highlights the awkwardness of art historians and academics in uniform and the tension between the cultural protection officers and soldiers who have other pressing priorities.

Panellist and author Robert Edsel who wrote the book of the same title imbued a tangible passion for the protection of cultural heritage during times of war. Edsel suggested that we should “use drones to preserve cultural treasures in Syria” and lamented that there were no cultural protection officers during the Iraq War.

Damon asked the audience to consider the role art plays in society and whether protecting it was worth the loss of life.

While the IOP moderator Diane McWhorter (Shorenstein Centre) and panellists Edsel and Lucia Allais (Radcliffe Institute for Advanced Study) used the movie as an opportunity to discuss the very real issue of cultural preservation during wartime the forum event doubled as a promotional stop for the movie and the Monuments Men Foundation. The movie is directed by Clooney and also stars Cate Blanchett, Bill Murray and John Goodman.

October 6, 2014 Comments Off on Nicholas Kristof Encourages Harvard Students to Make a Difference

May 30, 2013 Comments Off on Fortunato bids farewell to the Kennedy School

September 28, 2012 Comments Off on New Office for Student Diversity and Inclusion Opens