In addition to new hand dryers and updated plumbing, the restrooms in Divinity Hall at Harvard Divinity School have experienced a gender change. The single-person restrooms no longer have Women and Men signage, but signs that read, “All Gender Restroom: Anyone can use this restroom, regardless of gender identity or expression.”

The signs were a small piece of the student body’s push in 2013-14 to make the Divinity School more welcoming for transgender people. The Kennedy School should take up the charge.

“Transgender” is an umbrella term that includes both people whose gender identity does not match the gender they were assigned at birth and those who identify as neither women nor men. The Divinity School has openly trans students, and its classrooms play host to many conversations about gender relationships in religious and secular spaces. Students felt the school should make its structure match its inclusive mission.

A group formed out of that conversation: a handful of men and women, including me, colleagues who identify as transgender, and others who identify as cisgender, meaning their gender identity matches the gender they were assigned at birth. We talked about the most entrenched challenges: ways in which classroom and social expectations are established based on a person’s gender expression or identity. We talked about faculty training and student panels. Finally, we decided to accomplish something concrete: We could change the signs.

Students identified their concerns to staff, and the change was put in motion. Within six months of our early conversations, the new signs were up.

Zach Kerzee (MDiv ’14) was the student liaison to Divinity School facilities staff. Kerzee spent his final year of divinity school deeply involved in what he earnestly terms “toilet justice.” He spearheaded a campaign, along with HKS professor Richard Parker, for the City of Cambridge to build a public toilet when it renovates Cambridge Common. The city is moving forward with the plan after many months of stonewalling. As a minister for the Outdoor Church, which serves homeless people, Kerzee was deeply aware of the health and social consequences for people with no access to restroom facilities.

“Toilets are something that most of us have easy access to for most our lives, so we avoid thinking about them,” Kerzee said. “Everybody goes to the bathroom, so everybody has that basic need, but we kind of ignore the fact that some people can’t have that need fulfilled.” Restrooms that only allow one gender are an obstacle to meeting that central need. Kerzee said a trans friend told him going to the restroom was the most stressful part of their day. They had to make the decision: Which restroom do I use, and will someone attack me, verbally or physically, for using the “wrong” one? Or should I just hold it all day?

Just as restroom signage was an obstacle to fulfilling basic needs at the Divinity School, those signs remain an obstacle at the Kennedy School.

Of the single-person restrooms on the Kennedy School’s main campus, roughly half are marked as being for men or women only. While there are reasons (though not uncontested) to maintain multi-person restrooms as designated for women or men only, there are no compelling arguments for maintaining this separation in facilities that accommodate a single person at a time. Anyone can use a toilet, regardless of the shape of their urinary tract or their gender expression. A trans person might choose not to use any toilet, however, where the signage feels prohibitive.

We lack data on the number of trans students, staff, or faculty at the Kennedy School. Regardless of whether we are failing to serve current community members, however, we are certainly failing to demonstrate welcome to potential community members. We are a school committed to the idea that attracting top talent is impossible if we discriminate on the basis of gender. We must commit to non-discrimination in fact. “I’d like there to be more trans students and trans professors,” said one HKS student, “and one of the ways you attract talent is by making it clear that they’re welcome.”

As not only a top school, but a school of government and public service, the Kennedy School has a special obligation to ensure that people’s safety and opportunities not be determined by their gender, gender identity, or gender expression. “Civic government has a responsibility to provide for the basic needs of the people,” said Kerzee. “Schools need to provide for the basic needs of their students. Clean drinking water and a place to go to the bathroom are as basic as you can get.”

The expense of changing all signs for single-person restrooms on campus to make them more inclusive would be marginal — less than the student government currently spends on a semester of free coffee. The outcomes include a more welcoming campus and a more inclusive community. The cost-benefit analysis is clear.

“Just fucking do it, right?” says Kerzee, summarizing his call to action.  “Just do it.” 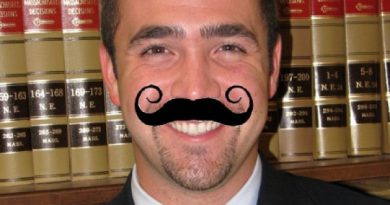 Movember: You “Mustache”… What Is It? 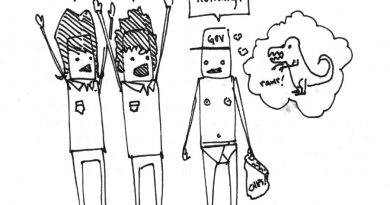