When a classmate of mine asked if I wanted to go to a Trump rally in New Hampshire, I was hesitant. I didn’t support Trump and I was worried of what sort of reception my friend and I would receive if it was discovered that we didn’t support Trump, given stories about people being attacked at his rallies. But, I figured this was an important moment in American history, that we were witnessing something greater than a presidential election. So, I decided to tag along with my friend to a Toyota dealership in Portsmouth to see what Trump was all about, armed with several messages from friends wishing me luck and hoping that I would be safe.

What struck me first about the rally was how unusual it was. The last rally I had attended was in 2014 in Iowa when Hillary Clinton, who had not declared yet, headlined for the Democratic candidate for Senate. That rally was packed with supporters, Democratic candidates from across the state, and tons of security. This time, I only saw the supporters and security. There was never an indication that other candidates were running for office, the only evidence being a sign for governor at the entrance. When we got through security, we were ushered into the backlot where many supporters were packed. While we waited for the speakers to arrive, the crowd danced to Backstreet Boys, entertained their kids, and took selfies with a black Trump supporter clothed in a ”Trump 45” presidential jersey.

Senator Jeff Sessions opened up and talked about how crooked Hillary was. He also declared that the election was rigged, implying that Hillary would steal the election. Out of all of the things that would be said during the rally, this shocked me the most. Sessions is a sitting U.S. Senator, and here he was parroting a dangerous, false theory when he clearly knows better. Absolute Trumpism corrupts absolutely.

Sessions was followed by Mayor Rudy Giuliani, who basically repeated many of the points made by Sessions. He railed against Clinton and the foundation and implored supporters to get out to vote. By this time, the crowd, though clearly grasping at every word, was waiting for the next speaker.

Trump was introduced with the loudest roar the crowd could give. Signs were waved, people yelled, and selfies were taken. Trump’s speech didn’t sound like any speech I had previous listened to from political candidates. It sounded like he had several bullet points he wanted to touch on, but did not write out exactly what he wanted to say. Instead, he meandered around, hitting those bullet points, but also touching on random things, especially things that made him look good. He often referenced how he did so well in the debates and how big the crowd was. He never mentioned any other candidates running for office in New Hampshire and never asked his supporters to donate or volunteer. Instead, he lamented that TVs were built in South Korea. He also attacked several specific American companies, like Apple and Ford, for not building in America anymore. While most other candidates would point to these companies as hallmarks of American capitalism, Trump threw them under the bus. But Trump was the most effective when he talked about the heroin epidemic spreading across parts of America. He mentioned a couple in New Hampshire that died due to an overdose. Trump used soft language and a lower tone of voice. The crowd was gripped and it did seem like Trump and the crowd were genuinely concerned with this social problem. At the end of the rally, Trump implored the crowd to vote, even if their doctors told them they were dying.

On our way back to Boston, my friend and I talked about what we had just seen. Many of the points made were outside of what we considered to be normal political talk. Trump painted the country as one that was about to collapse. It was an entirely pessimistic prognosis for the country. However, I was confident that he would lose, that the country would reject the narrative that Trump was building. Obviously, that didn’t come to pass. 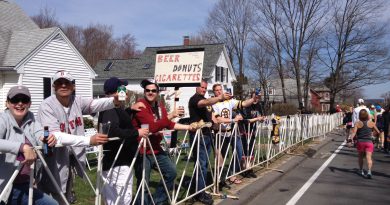 An Attack Comes Home: A soldier’s reflection on the 2013 Boston Marathon bombing

February 7, 2017 Comments Off on HKS Should Employ Grade Non-Disclosure