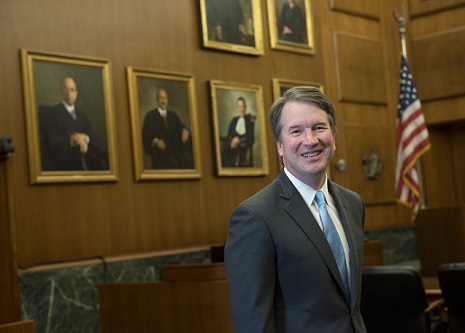 Opinion-archive Perspectives
October 4, 2018October 13, 2018
Drew Dickson
Drew is a first-year MPA candidate at HKS. The views, thoughts, and opinions expressed in the column are personal and belong solely to the author.

I may be the only person at Harvard who’s been on the fence about Judge Brett Kavanaugh.

I admit to you that I rolled my eyes at the Letter-Writing Campaign to Dr. Christine Blasey Ford, and at the “I believe her” stickers making the rounds around campus.

How to handle allegations of sexual assault — when an accusation can come down to one person’s word against another — is as important as it is difficult. A Supreme Court nomination, correctly understood as a job interview and not a criminal prosecution, is a poor place to tackle that challenge. But here we are: How do you decide between two credible people, telling two credible stories?

President Donald Trump is right when he said yesterday that “It’s a scary time for young men.”

Scary is a world in which an accuser’s words carry more weight than those of the accused. It is a horror of communist hearings and witch trials.

Like many women rightly fear sexual harassment and sexual assault, otherwise innocent men rightly worry about being falsely accused, without evidence, and summarily convicted of events that never happened, or which are terribly misconstrued.

Anyone who blindly believes one person’s accusation against another’s, word against word, profanes nearly a thousand years of hard-fought jurisprudence and wisdom. Although Kavanaugh’s freedom is not on the line, a person’s profession and good reputation is nearly as precious.

Fairness requires that when evidence appears equally weighted, the scales of justices must tip toward the rights of the accused. “Better that ten guilty persons go free, than that one innocent should suffer,” goes the ancient adage. That wisdom must hold today — even for Supreme Court nominations.

However, as process has continued to unfold, we have learned more. It tips those scales.

Kavanaugh’s school friends now say he lied about his conduct as a young man. In New York Times reporting here and this article in the Atlantic here demonstrates Kavanaugh materially dissembled to present a positive picture of himself against the allegations facing him.

With Kavanaugh’s dishonesty, his position collapses. It damages his credibility and lends weight to Blasey Ford’s account.

Regardless of what actually happened between Kavanaugh and Blasey Ford, I ultimately do not believe a drunken attempted sexual assault, with limited corroborating evidence today, is an automatic disqualification for office. Others may reasonably disagree.

However, lying about what happened or who you were back then is a failure of character today. That is a disqualification. You can drink too much; you can make mistakes; if you are contrite, and change, and apologize, you deserve forgiveness. You cannot lie and claim to be a different person.

With Kavanaugh’s credibility critically damaged, I now also believe that Kavanaugh is the man who attacked Dr. Christine Blasey Ford so many years ago. Worse yet, he is still that man today.

Kavanaugh’s conduct — from deliberately misleading statements about his teenage behavior and his angry, partisan testimony in his defense — is astonishing for a Supreme Court nominee.

Anyone could have cause to be angry at being accused – especially if falsely – of sexual assault. Anyone could be inclined to whitewash their past to make themselves look better today. The trouble is, we don’t put just anyone on the Supreme Court. Kavanaugh demonstrated a lack of character, a lack of judicial temperament. He is unfit to be a Justice.

September 20, 2011 Comments Off on Songs from Cambridge