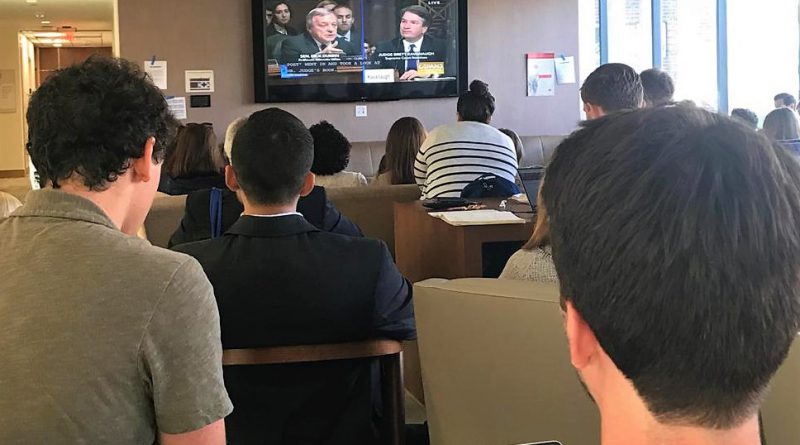 Opinion-archive Perspectives
October 4, 2018October 4, 2018 0 Comments kavanaugh, sexual abuse
Evelyn Nam
Evelyn is a first-year MPA candidate at the HKS. The views, thoughts, and opinions expressed in the column are personal and belong solely to the author.

I watched the Brett Kavanuagh hearing stunned, in disbelief over the fact that the angry man in the TV was truly a Supreme Court justice nominee. The deterioration of moral quality of our leaders concerns me greatly.

I believe that if Kavanaugh was a leader who this country needs in the Supreme Court, regardless of whether or not he’s guilty, his statement would’ve looked something like this: “I am sorry for Dr. Ford’s pain. As one human being to another, I am very sorry for her pain. I don’t think I did what I’m accused of, but I will fully cooperate to find out if it was truly me, because people deserve that honesty and she deserves that closure.”

Kavanaugh’s conduct during the hearing was nowhere close to that. And having watched the hearing entirely and having witnessed different conversations on campus unfold for the last few days, here is my verdict on Kavanaugh: He is dangerous – even if he is innocent.

The hearing was an honest opportunity for Kavanaugh to demonstrate his self-claimed ingrained habit of treating women, in all circumstances, with dignity, respect, and compassion. Rather, Kavanaugh only showcased for the nation that he is beyond capable of treating women like how I fear for women to be treated every day. A female senator, Amy Klobuchar, after opening up about her own dad’s alcoholism, asks Kavanagh if he has ever been black-out drunk. He responds that he’s “curious” if she ever has: “I’m just curious. Have you?” How appalled I was over that is beyond the language I know. Don’t answer the question asked by a woman: Mock her instead.

And beyond that misogynistic conduct by Kavanaugh, my fear persisted. The day after that hearing, I witnessed, all day long, the practice that I anticipated would be fueled by Kavanaugh’s conduct: blaming the woman for that soft question. “That senator should’ve been tougher on Kavanaugh.” “She blew that opportunity to really push him!” “She should’ve hold her ground.”

No. She did nothing wrong. The moral courage lacked in Kavanaugh, not in the senator who asked that question in the most authentic way she knew how, the most strategic way she knew how, and the most human way she knew how. She was graceful, warm, polite, and strong, all the things a leader should emulate. Accustomed to expecting a leader to demonstrate masculine qualities in the face of an unreasonable force, we say that she was too weak. Too warm. Too generous. She should’ve been more assertive.

But she shouldn’t have. She handled that perfectly. She did hold her ground. She didn’t stoop  to the level of a bully. She showed him what grace looked like in the face of immaturity and disrespect.

My point is this: This is what a man as unaware as Kavanaugh does to our communities. He blinds us to our daily practice of oppressing women, blaming women, mocking women, and humiliating them for mistakes that men have made. He fuels us to commit to an implicit harm on women and to think that such practice is an unquestionably normal behavior. This kind of harm adds up to a toxic, harmful environment for women. He is, simply, dangerous.

I fear that women will continue to be mocked, sneered, undermined, and ridiculed when we open up about their vulnerability, be belittled when we speak up in dissent, and be given no satisfactory answer to an honest challenge we pose to a man. I fear that women, when we do our best to question a man as politely and candidly, will inadvertently be blamed by other women who will blame us for not being “tough enough.” And I fear that when we are “tough enough”, we will be silenced by being labeled “angry women.”

I felt those fears in magnitude, so painfully by a man who is nominated to the Supreme Court. That moment of Kavanagh’s cruelty and the continuation of conversations on campus about Amy Klobuchar still shake me in terror and sorrow.

I am reminded of how I was raised by my mother, who fought tooth and nail to raise me as a strong woman for other women. Walk with women. Take them with you. When you see a woman being mistreated, always offer a hand. When she’s up against a powerful man, do everything you can to help her put up an honest fight. If you have to be the one putting up the fight one day, do it honestly and with passion, so you can inadvertently encourage another woman to do the same. And finally, when you see a man mistreating a woman, say something, do something, and always remember the use all your talents, voice and power to call him out and to help her out. After all, that’s the reason behind my commitment to public service – so this world can be better for women because I walked through it.

With this duty I feel, I challenge you to think seriously about what it’s like to be a woman. If it’s too hard to imagine, you have a great opportunity now, as a student at HKS, to learn and listen. Ask a woman what it’s like. Come to the talks organized by women across campus. Ask the Title IX Office and OSAPR for data and their interpretation of it. Ask me about the Committee on Gender-Based Violence Prevention and Outreach I plan to organize as part of the KSSG. Go to the #MeToo and #BelieveHer sit-in protest on Friday, organized by women on campus. Ask them why they’re protesting. Ask them about what they want. Don’t stop listening until they are truly finished telling you what they want.

When you accept this challenge, I want you to know that you will be supported. By people who have powerful reasons to #BelieveHer.

Will Nine Years of War be Forgotten?