Home > News > Why Harvard Graduate Students Are On Strike 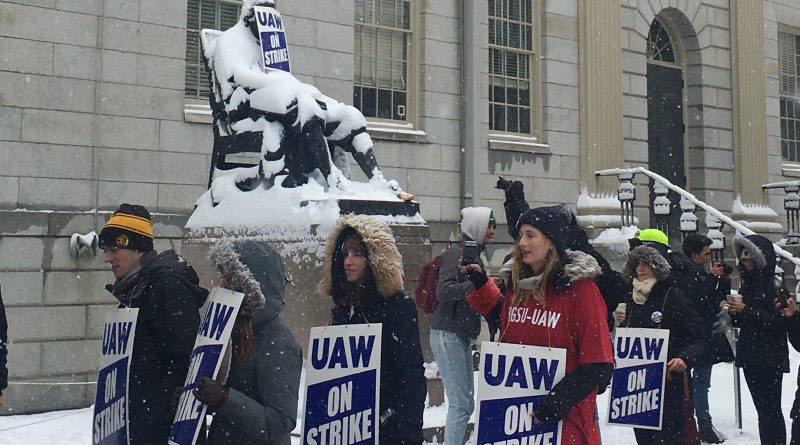 On December 3rd 2019, the Harvard Graduate Students Union-United Auto Workers (HGSU-UAW) strike went on an indefinite strike. Despite steady snowfall through the day, students marched in Harvard Yard demanding a “contract now”. Speaking with The Citizen, Ege Yumusak, a graduate student in the Department of Philosophy and a member of the bargaining committee, said HGSU-UAW is “incredibly happy with the turnout. We’re looking at over a thousand people circling the Yard right now.”

This is the union’s first contract negotiation with the administration. It represents an estimated 5,000 student workers across the university working as teaching and research assistants. The creation of the union itself was hard won, only receiving recognition in May 2018 in dramatic fashion. The National Labor Relations Board ordered a second referendum after it found the November 2016 vote unacceptable due to many graduate students incorrectly being deemed ineligible to vote.

After the successful May 2018 vote the HGSU-UAW was formed and began negotiations with Harvard University in October 2018. After 28 sessions, they have reached tentative agreement on twelve articles that include intellectual property, health and safety, employment records, tax assistance, recognition, and severability. But negotiations broke down on three issues: fair pay, affordable healthcare, and harassment and discrimination protections.

The most contentious perhaps is the demand for an independent arbitration process for discrimination and harassment cases. The union states that this would ensure a neutral third party arbitration, in addition to the current university controlled Title IX or Office of Dispute Resolution (ODR) process. It would also apply to cases on the basis of race, disability and other elements of identity, as “Title IX officers are only trained to handle gender-based discrimination and assault, not other types of discrimination (e.g., race- or disability-based).” “The University is blocking an independent mechanism for these complaints to be addressed. This is a right, a protection, that thousands of student workers across the nation have – and we deserve it too,” said Ege.

The University’s position is that this would create “an inequitable process for students” as only student workers would have access to it. They also state that an independent arbitrator cannot punish offenders. Instead they propose seats for HGSU-UAW representatives on the currently-existing Title IX Policy Review Committee, and seats on two to-be-established committees that will make recommendations on addressing other forms of discrimination and misconduct. The cases of Jorge Dominguez and Roland Fryer have been used to highlight the inadequacies of relying on just a Title IX procedure which allowed these professors to stay employed and be promoted despite repeated complaints and internal committees examining them.

The other two contentious issues that prompted the strike are fair pay and healthcare. The union is demanding an increase in pay for all categories of student workers, which would amount to approximately 6-7% per year assuming a three-year contract. They assert that Harvard is refusing to bargain over total compensation, which would provide teaching fellows with much needed stability. “We want fair pay. Some workers on this campus are making minimum wage. They haven’t seen meaningful raises in many years,” said a union member. The University is proposing a 7-8% wage increase over three years for salaried student workers. They state their proposed wage increases are in line with final contracts UAW has negotiated elsewhere.

On health benefits, the union is demanding better access to dental, mental health, and specialist care. “There’s a mental health crisis on campus,” said Ege. “We’re looking at higher rates of depression and anxiety and even suicidality. We are asking for an out-of-pocket maximum of $500 a year [to enable mental health care]”. The university has no specific mental health proposal, but has proposed a new insurance premium support fund and dental plan support fund. They have also proposed additional funding for students workers with children, including an increase in the one-time stipend for PhD students with a new child.

In addition to the contract demands, union members expressed other concerns over the University’s conduct. “These are really important issues and the University has done its best to block the means of communication between the union and those that we represent,” said Ege. “[By striking] we can show the administration that it’s time that they invest in us and give us the basic rights and protections we need.” Saul Levin, a striking Masters student at the Graduate School of Design, encouraged student workers to join the picket line: “Come out and join us. Everyone is welcome. We don’t want to be on strike, but this is what we have to do for people to earn a fair wage and that’s what we’re going to do.”

Harvard Kennedy School Dean Douglas Elmendorf, in his weekly email to the student body, emphasized that “the University recognizes the student union’s right to bargain and to strike without fear of discipline or retaliation for any students.” Student strikers who are hourly workers, such as teaching assistants at the Kennedy School, are eligible for strike pay, including international students.

In addition to the student community, 182 faculty have signed a letter of support to “affirm that participation in a strike will not affect our evaluation of our students, either in their work or in academics, nor will it affect advising, mentoring, or future letters of recommendation.”  Timothy Patrick McCarthy, Jason Furman, Marshall Ganz, Mathias Risse, Holly Fletcher and Richard Parker are the six Harvard Kennedy School faculty who have signed on.

Students have been seen picketing at HKS for the last few days, but otherwise classes have continued as usual. Members of the HGSU-UAW bargaining committee shared that it has been difficult to get the list of student workers they represent from the HKS administration, especially compared to other schools. Most HKS student workers we spoke to off the record said they did not have enough information on what the key demands were in order to decide whether to strike or not.

You can learn more about the strike, and the positions of both parties at: 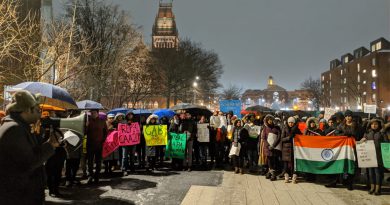