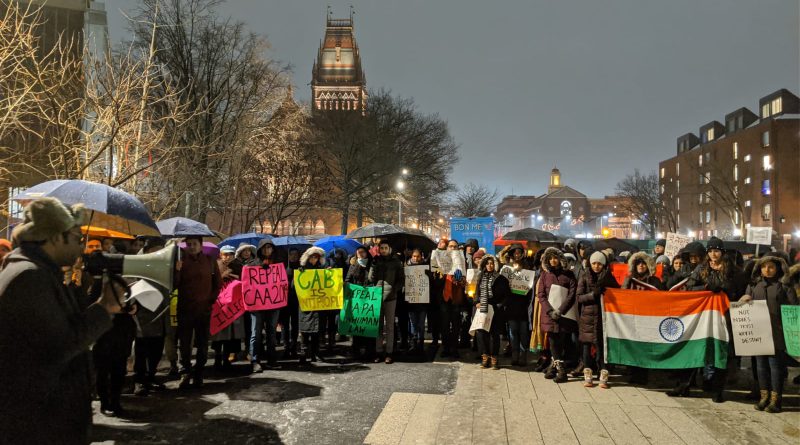 “My religion is Indian” said a poster held by one of the hundreds of students and South Asian diaspora gathered outside the Science Centre on the cold, wet evening of December 17th. Despite disparate climates and different hemispheres, protestors at Harvard organized in solidarity with student protestors in India against the Citizenship Amendment Act (CAA) – a bill seen by many as an attempt to delegitimize Muslim citizenship.

The precipitating event was the police brutality against student protestors in Jamia Millia Islamia University in Delhi, where hundreds of students were beaten and tear gassed. As images of bloodied students screaming for help spread on social media, students across universities rapidly organized. Sunaina Pamudurthy, an MPP student at the Harvard Kennedy School, told The Citizen, “as Indians studying far away from home, the least we can do is be good allies, educate, and organize. Being apolitical or silent is being complicit.”

The newly passed law enables fast track citizenship for persecuted minorities from neighbouring countries – but on the basis of religion. Citizenship will be granted to Hindus, Jains, Buddhists, Sikhs, Christians and Parsis from Bangladesh, Pakistan and Afghanistan – but not to Muslims. Outside the Science Centre, students recited the Preamble of the Indian Constitution, emphasizing the guarantee of a secular nation as the essence of India’s social fabric.

Dr. Ruha Shadab, a graduate student at the Harvard Kennedy School, says “I take pride in being a representative of India here. Our country’s high global reputation stems from its ideals of democracy and equality. Several incidents over the past few months – including the CAA and now the violent suppression of student protests – have been hard to defend, especially since India is an emerging superpower and is looked up to by many countries.”

It is not just the CAA in isolation that is concerning. The National Register of Citizens (NRC) is requiring residents of India to prove their citizenship, sometimes asking for birth certificates from decades prior, despite historically poor record keeping. Millions of people have been unable to do so, and the Indian government is building mass detention camps for those stripped of citizenship. With the CAA, however, those who are Hindu could be granted citizenship while those who are Muslim will not. A solidarity statement led by Harvard Law Students and signed by over 400 people from 19 US universities pointed out the violation of this law with the Indian Constitution and International Human Rights convention.

The protest drew students from MIT, Tufts and the Berklee School of Music among others. As one student put it, “this is as much for us as for the students back home. Several of us are all alumni of the universities that are being attacked right now. We are here because of the public education we have had in India. We owe it to those who come after us.”

The organizing has largely been led by HKS students. Arif Hussain, an alumni from HKS and the Director of the Coalition for Democratic India remarked that “seeing more than 300 Harvard students, alumni and allies come out in icy rain was truly uplifting. This is particularly noteworthy of a space that has tended to be  conservative and pro-establishment, not least because the Government of India sponsors several officers to study at HKS every year. This act of solidarity is not a singular event but signifies a turning of the tide and expression of a new resolve.” HKS professors Cornell Brooks and Timothy McCarthy tweeted their support saying that they “hope this gathering furthers justice.”

The protests in India continues and the United States State Department  spokesperson has stated that “as a fellow democracy, we respect India’s institutions, but are concerned about the implications.” The HKS India Trek is currently underway until 24th December, with 18 students from 6 nationalities. “Students have had a lot of questions about the protests, and have asked these in their meetings with Union Ministers,” said Amanat Bopparai, an MPP student and one of the trek organizers. “The clash of ideologies about the idea of India has been deeply informative to the students. It has made me appreciate the power of democracy and the need to fight for one.” 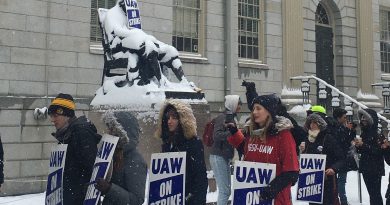 Why Harvard Graduate Students Are On Strike

December 6, 2019 Comments Off on Why Harvard Graduate Students Are On Strike