Home > Opinion > I’m not Violating your Rights, and I can Live with Hurting your Feelings 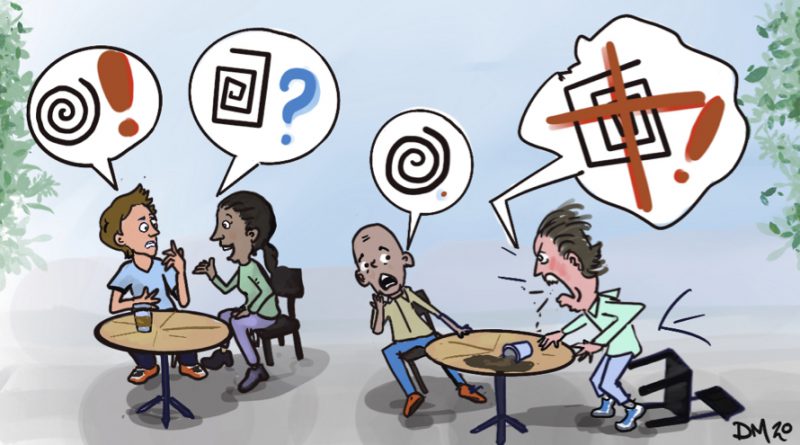 Back in 2007, I was holidaying in Iran with a Danish friend. This was a few months after the Cartoon Crisis where the Danish satirist Kurt Westergaard drew the prophet Muhammad with a bomb in his turban. To put it mildly, it didn’t go down well in the Middle East. The Danish flag went up in flames, a fatwa was issued against the cartoonist, the newspaper Jyllands Posten underwent 24/7 protection, and Danish pastries in Iran were renamed “Muhammad’s Flowers.”

It likely wasn’t the best time for Danes to be in Iran. But here we were. The first time someone asked us where we were from, my friend said: “We’re from Muhammad’s Flowers.” Any potential tension was immediately deflated when we all broke down in laughter. We had a fantastic holiday. Humor can bridge even the deepest divides.

In Denmark, the Cartoon Crisis was a moment that could have easily polarized Danes – but it didn’t. When tensions rose, a group of Danish Muslims and I started the Democratic Muslims movement to show that the majority of Muslims disagreed with the radicals. We welcomed democratic values. We engaged in debates and embraced diversity. And we strongly opposed any attempt to crush freedom of speech.

I’m not religious. But I wouldn’t go about drawing Muhammad as a terrorist or King David as a rapist just for the heck of it – even if I was a satirical cartoonist. I would, however, defend without hesitation the democratic right of others to do so. Open debate across differences reveals the rough beauty of democracy.

Imagine my surprise when I encountered the hypersensitive and easily-offended culture of the Harvard Kennedy School. It seems that there are always at least a few people screening conversations for something to disagree with – and when they do, they are always prepared to feel belittled, offended, or violated. Conversations are like murky minefields where your point of view isn’t just misunderstood, you are morally crucified if you don’t immediately apologize.

I’ve only been here part of a semester. But already, I’ve heard different versions of “I feel violated that…” more than I have ever encountered in the past. And, more dangerously, instead of discussion and explanation, I see immediate surrender. Apologies, an awkward moment of silence, flickering eyes, or a mumbling attempt to change the subject. Conversation stops.

It reminds me of Ray Bradbury’s Fahrenheit 451, where special-interest groups and minorities protested relentlessly against books that offended them. Soon, all books looked the same, as writers attempted to avoid backlash. But this wasn’t enough for the hypersensitive and easily-offended culture. They decided to burn books rather than permit opposing opinions. Fahrenheit 451 is the temperature at which a book burns.

Are we just shy of burning books at HKS? As one of my classmates said, at HKS it’s easier to replace our freedom to think with a freedom from thinking.

In shaming others from expressing conflicting opinions, the offended have developed blind spots. They are oppressing the same right to free speech that they use themselves to express their offended feelings. Rights that generations before them fought and died to secure.

The offended seem to completely ignore that it’s is not their rights that are being violated. It is their feelings.

I don’t believe we should intentionally hurt each other – I am a firm believer in good manners. We should show consideration and tolerance, and listen to people who perceive certain remarks as hurtful.

But it doesn’t do any good for a community when the easily offended destroy public debate. It hurts all of us when the noisy few feel entitled to speak on behalf of the silent many.

It would benefit the future leaders of HKS to distinguish feelings from rights, accept that others may take different positions, and engage in open debates.

February 14, 2012 Comments Off on The KSSG Progress Report