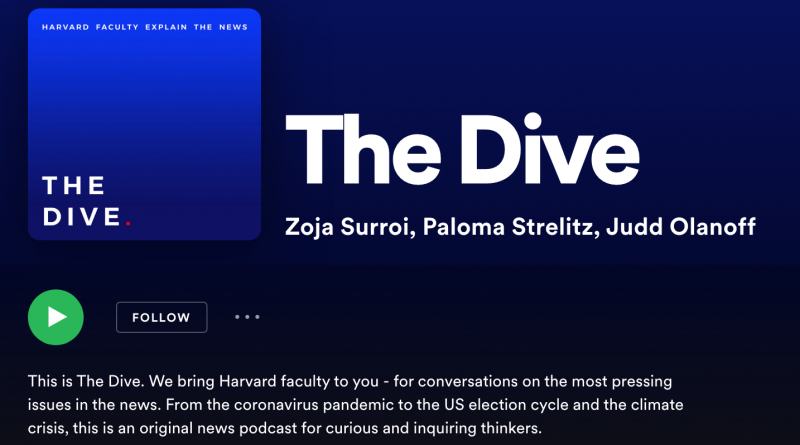 News
May 27, 2020
Zoja Surroi, Paloma Strelitz, and Judd Olanoff
Zoja and Judd are first-year MPA students at the Harvard Kennedy School
Paloma is a 2020 Loeb Fellow and a cofounder and partner of Assemble Studio

The Dive podcast, launched by two HKS students and a Loeb fellow, features Harvard faculty discussing the news. Download their episodes here, including a soon to be released interview with President Lawrence Bacow on Harvard’s COVID response.

When New York Magazine editor-in-chief Adam Moss stepped down last year, he spent Fall 2019 as a fellow at the Harvard Kennedy School. He led a semester-long workshop at the Shorenstein Center on how to build a better political media. We participated in that workshop.

One theme kept emerging: there’s not enough context and explanation in the news. For us, a lightbulb went off. We realized that we could provide that explanation and context by hosting accessible conversations with Harvard faculty on pressing news issues. The Dive podcast was born. Our goal – to bring the expertise and engagement of the Harvard classroom to a public audience. The Dive’s mission is to make global events understandable. Packaged as a 30-minute podcast, it’s released weekly and tackles one subject at a time with a Harvard expert in the field.

Given the urgent need to explain complex news during COVID-19, we accelerated our planned launch date (and adapted the format – switching from video to audio) so we could move ahead with production during the lockdown. We’ve been using Zoom to record episodes. Each week, before taping, we dive (pun intended) into the various topics by consuming a range of news and media, then (after some debate), we curate the questions that are most critical to understanding the core subject matter. Our goal is to make the conversation accessible and enjoyable for all listeners, whether they have experience in the field or not.

We posted our first episode on March 24th, a discussion with Jason Furman, President Obama’s chief economist, on how to save the economy during COVID. For now, we’ve been focused on the pandemic, as there are so many layers to discuss – crisis management, vaccine development, and others. The Dive now has seven episodes under its belt, with guests including Juliette Kayyem (Former DHS Assistant Secretary), Amitabh Chandra (renowned health economist), Robby Mook (Hillary Clinton’s 2016 campaign manager), and Cornell William Brooks (Former NAACP President).

The Dive has been growing fast. We’ve reached a global audience, with downloads in 44 countries. It’s been rewarding to mobilize a new initiative and to receive positive feedback from both policy wonks and casual listeners. We’ve received an enormous amount of support and encouragement from faculty, the administration, and our classmates. The Harvard community has been our inspiration. We’re grateful for the privilege of hosting its experts and delivering them to you.

We hope you’ll listen and let us know what you think and what you’d like to hear more of. We can be reached at ideas@thedive.media. 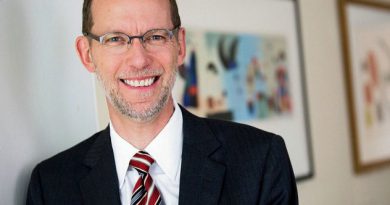