Journalists have increasingly blurred the lines between the influence they are accorded as trusted informers and the “influencer”-like power their professionally linked social media platforms provide them. As a digital organizer fighting to protect our democratic institutions on a daily basis, I’ve encountered this problem time and time again.

The Washington Post’s Dave Weigel recently tweeted a 5-year-old picture of Joe Biden and now disgraced Theranos founder Elizabeth Holmes, with no context except a caption saying “#veepstakes”. In response, I tweeted asking Weigel if his tweet was productive coming from a journalist in his position. Americans are already forced to sift daily through a barrage of intentional disinformation. Weigel clapped-back, “Sometimes people make jokes on Twitter.” His fans quickly jumped to defend him. They directed so much vitriol my way, that I eventually deleted my reply.

Readers and reporters alike were frustrated with POLITICO’s context-blind coverage of the Republican National Convention. Tim Alberta, political correspondent of POLITICO wrote of how “Melania restored a sense of normalcy” at the convention without mentioning her norm-desecrating use of the Rose Garden for partisan political purposes. “Show some grace,” Alberta demanded of angry readers in a now deleted tweet to his 73,000 followers and the world. In his tweet lecturing readers, Alberta acknowledged he “meant to note unprecedented use of Rose Garden in [his] write-up of Melania” but was possibly “tired & sloppy.” 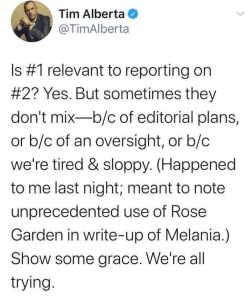 New York Magazine’s Josh Barro, chimed in, “This convention is making a lot of you ( his readers and followers) very annoying.” “I get it,” he followed up in a second tweet, “you have feelings about Melania.” Barro has over 260,000 Twitter followers. Journalists like to remind us “Twitter is not real life,” but their tweets attacking readers often undermine the service they have dedicated their lives to – empowering the public with information.

I rely on journalism every day and to many, it’s a lifeline for trustworthy information. So to be mocked by Josh Barro for caring about a media that normalizes a first lady who famously suggested “she didn’t care” about kids in cages, upsets me. To be told to “have grace” by Tim Alberta who admits he failed at his sacred secular task makes me feel hopeless that our cherished “fourth estate” will truly hold this administration to account.

When journalists publicly confront frustrated readers on social media, further alienating them, treat consequential news as a joke, or promote debunked Russian propaganda to their 1.4 million followers it antagonizes the public their employers claim to serve. As The Times’s Nick Confessore admits, “to the extent my Twitter account is influential or widely read, it is largely because I am employed by The Times.”

Publications are right to worry about the damage individual journalists’ online behavior can cause to the credibility of their organization and to the industry, overall. In 2017, The New York Times announced new Social Media Guidelines. As Times Executive Editor Dean Baquet explained, the guidelines seek to balance an admitted business need to maintain “a vibrant presence on social media” while upholding “the values of our newsroom.” The Washington Post’s social media policy goes even further, noting, “Post journalists must recognize that any content associated with them in an online social network is, for practical purposes, the equivalent of what appears beneath their bylines in the newspaper or on our website.” This is true, especially when you consider most media personalities are “verified” by Twitter and other platforms – adding a layer of apparent legitimacy to their posts.

Such was the case with Weigel’s “#veepstakes” tweet. He was part of the very disinformation journalists should protect us from. Weigel’s fans thought otherwise – they insisted that not one of his over 500,000 followers would fail to recognize Elizabeth Holmes or miss his joke. Responses proved otherwise. “Please fill me in. I don’t get any of this. Who is this woman?,” commented one user, “What does she have to do with [the] VP pick?” 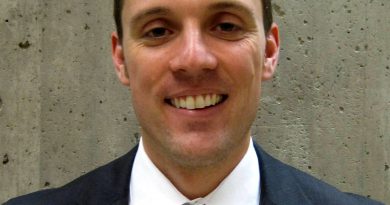