Home > Opinion > What I didn’t learn in Israel 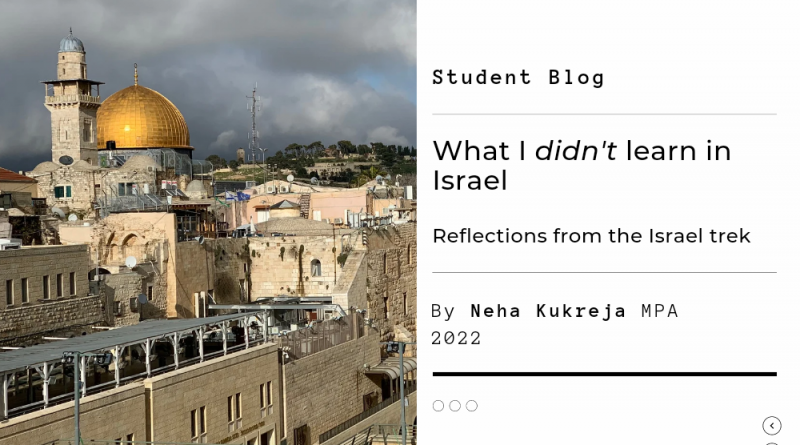 The author made updates to this piece on April 18, 2022. The paragraphs added later are identified with an asterisk at the end.

The author would like to acknowledge that the timing of publication coincides with the deadly terrorist attacks in Tel Aviv that have killed 13 Israeli civilans as of March 22nd. While this article questions specific intentions of the Israeli government, the author vehemently condemns these terrorist attacks against Israeli civilians.*

Over spring break, students at Harvard Kennedy School (HKS) co-organized separate treks to Israel (I-trek) and Palestine (Pal-trek). I participated in the first trek and traveled to Israel along with ~300 other students from HKS.

The trip was organized by a group of Israeli classmates via itrek, a nonprofit organization that specializes in treks to Israel for graduate school students across the globe. We visited some of the world’s most important religious sites for Christians, Jews, and Muslims, including the Dome of the Rock and the Western Wall— sites I’ve only read about in textbooks and would’ve never imagined visiting in person. We floated in the Dead Sea, and we celebrated the festival of Purim in Tel Aviv. We even uniquely traveled to the West Bank, where we visited a Palestinian refugee camp after meeting with a Palestinian bookshop owner in East Jerusalem.

Overall, the trip was the learning opportunity of a lifetime. I returned home with a richer understanding of why the Israel-Palestinian conflict persists, eager to share this experience with my family. While I knew the trip could benefit from more Palestinian voices, I felt confident that I-trek gave us a fairly nuanced picture of “both sides.”

That is, until I called my first friend from Pal-trek.

“You guys did what on Monday night?”

“We went to a winery in the West Bank!” I responded. “It was so much fun—I even got kind of drunk.”

I could hear her taking a deep breath on the phone and didn’t understand why she wasn’t equally excited.

“…But, didn’t they tell you about wine-washing?”

Immediately I did a google search, and my heart started to sink. “Wine-washing” is the phrase used to describe Israeli settlement and subsequent destruction of Palestinian lands to produce world-class wineries. “The district with the largest growth in the number of wineries in the past few years has been the West Bank…the production of alcoholic beverages is forbidden to Muslims, who are the majority of residents in the West Bank and therefore—contrary to olives or wheat—the ownership of the vineyards cannot be disputed,” wrote Dr. Ariel Handel of Tel Aviv University.

“Shit,” I thought. “I should’ve known better, or at least done my homework.”

As I continued to speak with her and more friends from Pal-trek, more differences in the narratives we were given started to emerge.

First, I enthusiastically told a friend about the unbelievable opportunity to meet with Israeli President Isaac Herzog and Prime Minister Naftali Bennett. I recounted how the two officials expressed they simply couldn’t go to the negotiating table with Palestine because there was nobody to negotiate with. They argued that there are still multiple competing factions that claim to represent the Palestinian people, rather than one unified entity to speak with.

“That kind of makes sense,” I thought.

But then, my Pal-trek friend explained that the continued factionalism is part of the Israeli government’s strategy to create sufficient disunity among the Palestinian people, to quell an opportunity for a mass uprising. Additionally, it’s in Israel’s strategic interests to react differently to various Palestinian factions, perhaps to evoke a perennial fear around the inconsistency of response tactics—not too different from the ever-changing, arbitrary rules governing Palestinian travel and citizenship.

I don’t have concrete evidence to support each claim, but I also wouldn’t expect public admission of these tactics from the Israeli government. Once again, the wheels are turning about what narrative I’ve been fed.

Second, I recounted our gut-wrenching visit to an Israeli kibbutz less than a mile from the Gaza border. The woman who guided us through her community explained how at age three the children are taught to immediately take refuge in one of the nearby bomb shelters upon hearing the community alarm over the loudspeaker. The alarm indicates that a missile—usually from Gaza—has been detected, and then they have 10-15 seconds to seek shelter. The last person to die in the kibbutz from one of these attacks was in 2008, and the last missiles were launched in May 2021.

“How horrific,” I thought as I held back tears.

A Pal-trek friend had no “but’s” in response to this anecdote. The tyranny of haphazard, deadly missile strikes is something that no community should ever have to bear—full stop. She did, however, invite me to question the location of the kibbutz: “Was it historically designed to be an Israeli settlement, given its proximity to Palestinian territory?”  She also suggested I question the motives for people to stay in the kibbutz: “Despite the terror, what incentivized them to stay—and who is providing those incentives, if not the Israeli government?”

While grappling with these new questions, I am also trying to maintain my newfound understanding of the harrowing trauma and fear faced by the Israeli people. During the trip, I came to understand that antisemitism existed well before the Holocaust, and Jews have been persecuted for centuries, leading to mass waves of refugees and a yearning for a place to call home. Additionally, Israel faces a credible security threat from factions in its neighboring countries, heightening the fear of attack at any random moment.*

How do I hold this truth of the Israeli people, while also vehemently condemning the government’s oppression of Palestinians? *

By no means was I a newfound expert in the Israel-Palestine conflict when flying back home from I-trek, but I was confident in what I had learned. Now, that confidence has been upended, and I’m left with more questions than answers. This disruption, however, is a small and worthy price to pay to get closer to the truth of hearing all narratives. 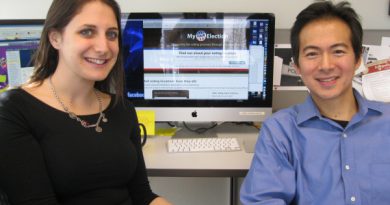 November 24, 2012 Comments Off on HKS voting project launch a success 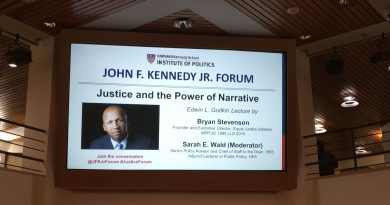 December 9, 2018 Comments Off on HKS students urged to protect their hope dynamic